Stay with me awhile, and you’ll soon know what to do when you’re rolling around a little too fast and want to stop and stay safe. Or you just want to pause a bit for whatever reason.

At this point in time, I take it you’ve learned the basics of rollerskating. You can easily rollerskate forward and backwards.

You can also handle simple and easy maneuvers such as bubbles or scissors or swizzles. Now, all you want to learn is how to stop your skates at any point in your quad skating session. And that’s precisely what I’ll describe in this stopping on rollerskates tutorial.

First off, you need to wear some decent rollerskating helmet to keep your skull intact even after a spill. Wear rollerskating knee pads as well along with a good, fitting pair of wristguards.

4 Beginner-friendly Methods to Stop on Rollerskates

Of these 4 rollerskate-stopping strategies for beginners, using your knee pads to skid off the ground and using the toe stops are the easiest stopping tricks to learn.

But that’s not saying the remaining two stopping techniques are hard to apply. So, let’s dive in and learn how you can slow down and bring those fast-rolling quad skates to a safe, controlled stop.

How to Stop on Quad Skates Video 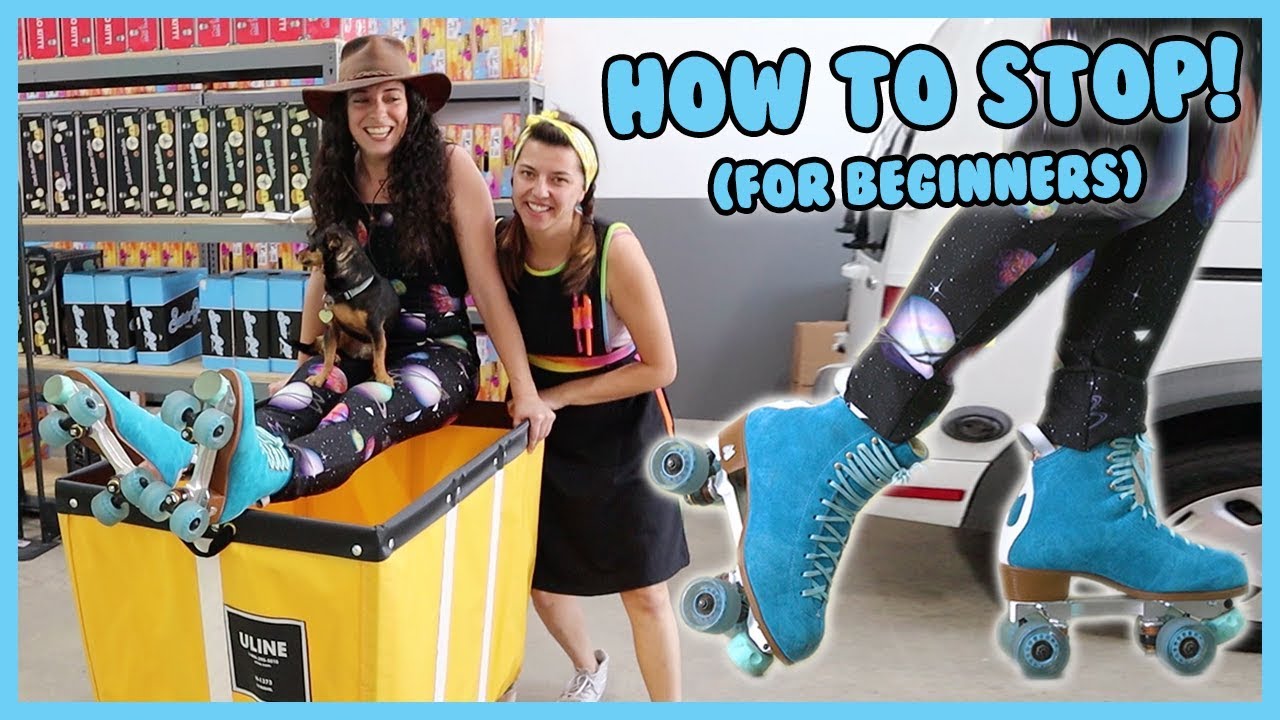 1. Use Your Skate’s Brake to Stop (Toe Stop Drag)

I believe you have there is a decent pair of beginner rollerskates. If I’m right, that skate features some know of sorts on the front on the end of the toe box or toe cap. That little piece of plastic you see there should help you to slow down quite a bit and finally stop if done right.

So, how do you use the toe stops on your quad skates? It’s not nearly as hard as you think. But you still have to practice putting this braking system to proper use.

Unlike in the case of inline skates that have one brake on the right skate, quad skates feature two brakes. And that tells you that stopping on roller skates should be easier than stopping on rollerblades — and it is.

I’ve tested both skates and felt how easily each skate type comes to a stop, and quad skates hands down win here. But no one ever chooses quads over blades just because the former have two brakes and are easier to stop.

Here’s how to Perform the Toe Stop Drag

To pull off the toe stop drag, you must first learn how to shift your body’s balance between your feet. So, try to stand on one foot and then the other until you can do that without difficulty.

Next, learn how to do leg lifts. Get comfortable rollerskating forward on one foot and then lift the other foot as you roll. Then, bring down the foot you lifted. You need to drop your leg with the toe pointing down.

Let the toe gently touch the ground and start skidding in the same direction you’re skating in until you come to a solid, safe stop.

If you apply too much pressure via the toe stop, you’re not going to have a nice, stable drag. Things will likely get shaky, wobbly, and unstable.

For perfect performance of this trick, avoid leaning too far back. If you do, you’ll lose your balance and probably fall. As you lift that foot, shift your weight over the foot in contact with the ground. With practice, weight-shifting starts to feel kind of easy and natural.

If you wobble while using this trick, try to drop your hips even lower. That means bend your knees even further, which lowers your body even closer to the ground, which in turns increases your overall stability.

One more thing: the toe stop drag isn’t a technique you apply when you’re cruising around insanely fast. If you’re approaching some obstacle fast or a crowd, this isn’t the best stop to put to work.

If you’re rolling fast, the toe stop drag is mainly for helping you slow down a bit. This method likely won’t enable you to come to an abrupt stop in an emergency.

2. Slow Down Using Your Knee Pads

I need to repeat it: make sure to protect yourself against falls using the best rollerskating gear you have. Wear good knee pads, preferably knee pads with a hard, plastic shell.

But you can also use your knee pads to come to a stop in some cases. Especially when you’re a complete beginner and aren’t comfortable with any of the other stopping mechanisms.

To use your knee pads to come to a safe halt, start gliding forward. Gather some momentum and then drop down on one of your knees.

Because the knee pads are all hard plastic, you’ll start sliding on the ground in the initial direction. You may not stop as fast as you would like, but you’ll certainly stop.

Well, this isn’t how you want to be performing your stops. I mean, this approach isn’t like the coolest stopping strategy ever. Plus, you don’t want your skating buddies taking photos of you stopping this way all the time. So, use this method for sure, but don’t make it your ultimate stopping strategy.

3. Use the T-Stop to Slow Down Your Quads

The T-stop works pretty much like the toe stop drag. The only difference between a toe stop drag and a T stop is that when performing the former, you count on the brake and when doing the latter, you rely on the roller skate’s wheels.

To pull off this stop, get gliding forward as you did when using the brake to stop. Then, transfer your weight to one of your feet and lift the dominant foot. Well, you can lift whichever foot you like, but I’ve found that using the dominant foot to do the stopping works better.

Next, drop the foot down gently until it comes into contact with the ground. From there, let friction between the wheels and the ground slow you down and finally stop you.

You want to bend your ankle out a little as the skate drops so that the wheels connect to the ground at an angle. Landing the foot that way tends to result in a smoother drag. And because this speed-reduction trick has all four wheels working together, it’s more powerful than the toe stop drag.

That means you can stop easier using this method even if you were striding at a relatively high speed. But if you wobble a little, don’t worry. Instead, lower your center of gravity by bending your knees just a little more.

You probably have heard about the plow stop if you’ve been hanging around rollerskaters for any length of time. That’s because the plow stop happens to be one of the best skate-stopping strategies ever devised.

The plow stop looks sexy and brings you to a well-controlled stop almost effortlessly. So, how do you stop your quads using the super-popular plow stop?

How to Perform the Plow Stop

Your knees should stay bent as they normally are when skating forward or backward. However, don’t have your feet opened too wide apart. If your stance is too wide, you won’t stay up and stable for long. Plus, you’ll likely experience some strain.

Also, stay chin up, tummy shoved toward your spine, and shoulders straight across. Now, bend down your knees and start rolling out. About half-way through the roll, start angling your feet so that the toes start pointing toward each other.

But while your toes are now coming together from an arc-like trajectory, they shouldn’t come into contact. Nor should your knees touch each other.

Should your toes come too close as to touch, you’ll lose your balance. And the same applies to your knees coming too close.

When your toes start rolling inward rather than continuing straight forward, this generates more friction than was being produced initially. This increased friction is the power that slows your quads down.

What If I’m Rolling Fast But Want to Stop?

But if you were rolling pretty fast, just doing that won’t suffice. To come to a stop from higher speeds, let your toes move inward until the inside wheels of your skates touch a little.

Again, friction happens when the wheels rub a little. That wheel rubbing combined with the friction from angling your skates should eventually stop you.

That said, avoid slamming your skates into each other so hard that you trip on your toe and fall forward. It happens, which is one more reason to always gear up good before ever stepping on the rollerskate rink or wherever.

How to Stop on Quad Skates: Final Thought

Stopping on quad skates helps a lot when it comes to staying safe while rollerskating. You can use any of the 4 stops discussed above to slow down and stop that little four-wheeled skate anytime.

None of the stopping techniques are too difficult to learn, but some are definitely easier than others. I insist that you learn all 4 stopping strategies and use them at different times to keep your knowledge fresh and useful.

As with anything else you’ll ever learn in your life, the more you practice the easier it all becomes, and the happier and more fulfilled you become.