When it comes to learning how to rollerblade, taking off and stopping are two super important parts of the process. Beginner rollerblades typically come with a braking system, and the brake is always on the right skate. Now, having some stopping mechanism is one thing, but putting it to work smoothly and safely is quite another.

So, how do you stop on rollerblades? How do you stop yourself from traveling forever in a straight line unless some nasty external force eventually stops you?

You need to master using the braking system. There’s a bit of a learning curve here, but if others have done it and do it all the time, why not you?

But what if your skates have no brakes for some reason and you still want to stop safely as a beginner inline skater?

How to Stop on Rollerblades Video 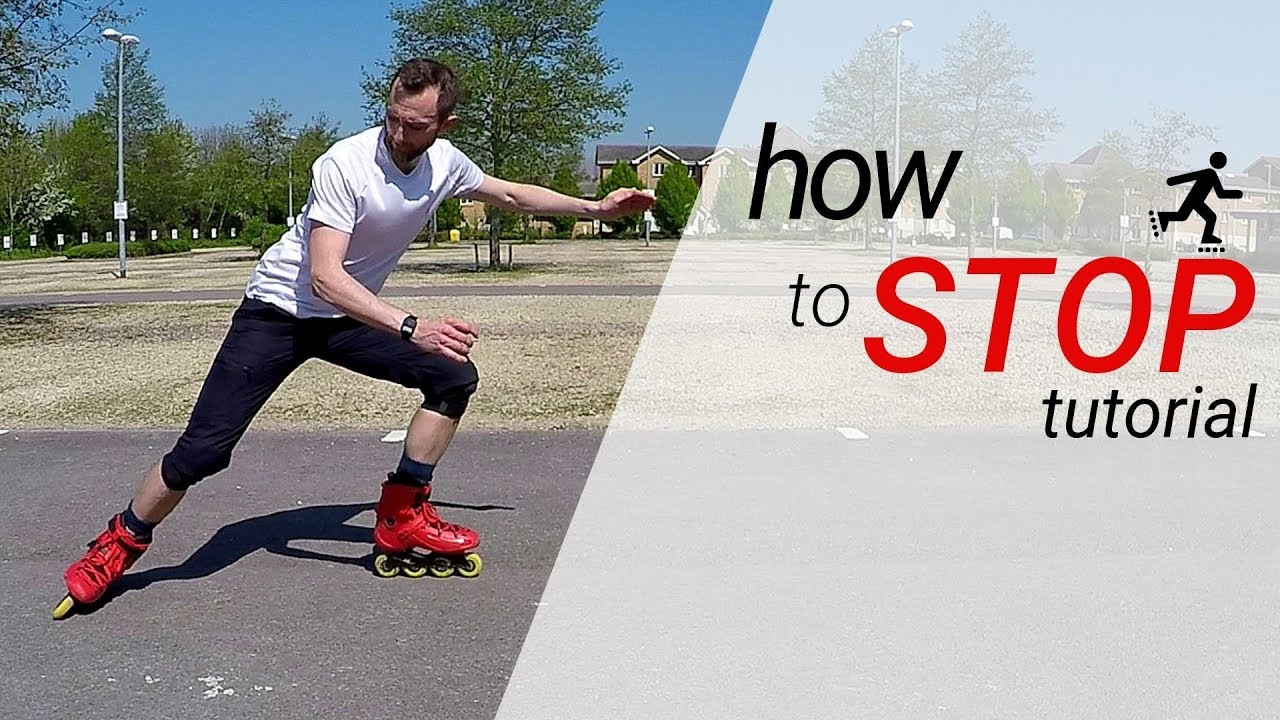 7 Ways of Stopping on Rollerblades (for Beginners)

There’s quite a few ways to stop a fast-gliding pair of rollerblades. Some of these rollerblade stopping techniques are reasonably easy to use even for complete beginners. But with other inline skating stopping strategies, you’ll have to practice many times before you can execute each stop just right.

I’ll take you through 7 effective beginner rollerblade-stopping approaches to help you skate safely each time. So, let’s roll (pun intended).

One of these 7 stopping methods requires you to have a brake on your skate but the others don’t need a braking system to execute. You need to know how to slow down your blades whether the braking mechanism is there or not.

1.How to Stop Rollerblades Using the Heel Brake 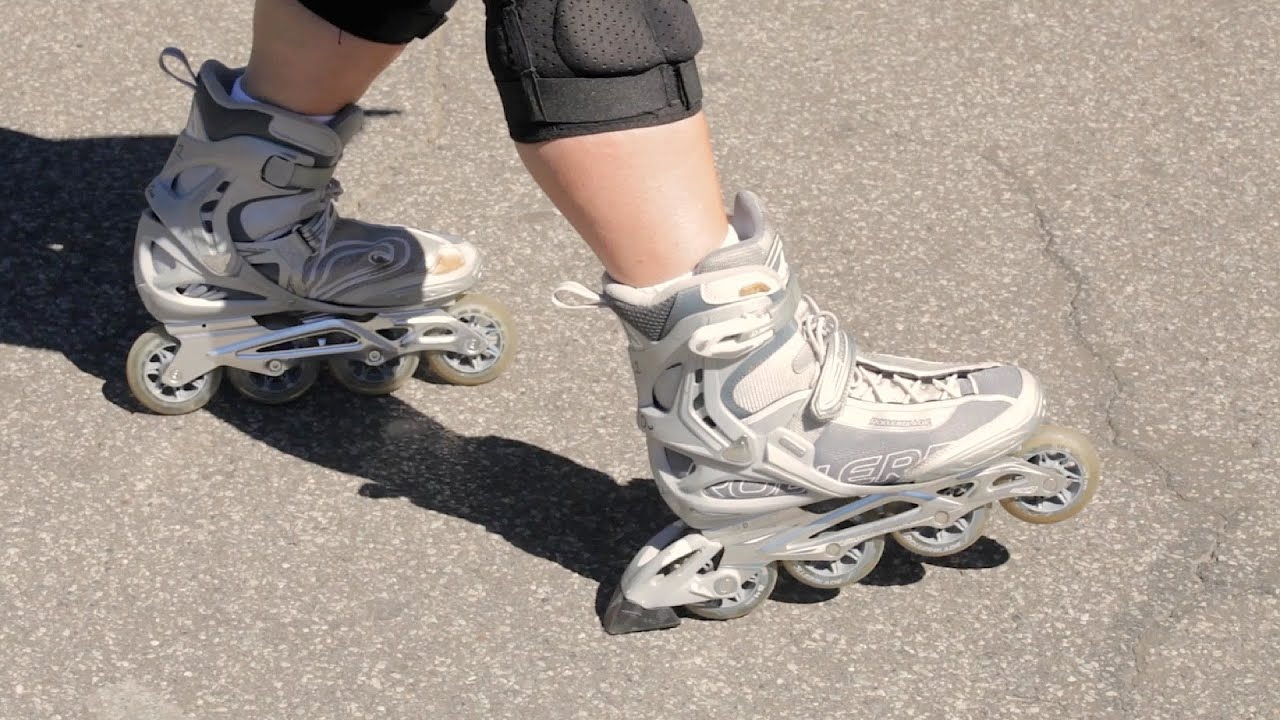 In this stop, stretch your hands out in front to maintain your balance while bending your knees a little. Then, push the right skate forward (the one with the brake) as you lift your toe and lower your heel.

To make doing all this feel natural and less challenging, try to sit in an imaginary chair below your bum. Also, avoid bending too far forward or standing straight up.

Now, in that nice and low position, put your heel down hard until it touches the ground/road. The friction between the brake and the riding surface should eventually bring you to a stop.

In this method, you initiate stopping by dragging one foot behind while the other foot keeps gliding forward. This approach relies on surface friction to cause the skates to come to a stop.

The T stop is one of the easiest skate stopping strategies I know. I believe you can learn this stop in less than an hour. That said, you may find that as you try to practice this method, you’ll drift off to the side of the road or street or wherever you’re skating.

You may also find yourself losing a bit of control and even turning around 360 degrees. That’s why you need a proper rollerskating helmet and high-quality rollerskating knee pads, elbow pads, and wristguards.

How to Do the Drag Stop/T Stop

But how exactly do you do the drag stop? To master the drag stop, first off make sure you can glide on one foot for a short duration without losing balance.

Then, try alternating between one foot and the other until you come to a place of total confidence. Alternating your feet helps your balance a great deal, and your wheels will wear almost similarly.

Ready to roll? First, adopt a proper stance. The proper posture here is to have the foot you wish to drag positioned at least one foot behind the gliding foot. In this stance, your head and shoulders face forward, and the foot behind should face 80-90 degrees to the side.

Make an L Shape to Avoid Tripping and Falling

Make sure the foot you’ll drag isn’t right behind the other one. This foot should stay a little to the side in an L shape. If you place the dragging foot right behind your gliding one, chances are good that you’ll trip on your skate and fall.

Now, start gliding forward. Then, drag the other foot as described above to see if you can stop. To build confidence fast, don’t go too fast initially. Increase the speed progressively until you get the drag stop down to a fine art.

Easy, right? Let me know how it goes in the comments below.

3. How to Stop Inline Skates Using the Plow Stop

If you ice skate or ski, you’ll likely find this stopping method pretty easy.  When executing the basic plow stop, you start with your shoulders, hips, and knees in good alignment.  Meanwhile, your knees stay a little bent out and springy.

With this stance, you create some sort of a stability rectangle. That stability and balance help you complete your stop knowing your stance won’t get out of whack, causing you to fall.

While still in that nice and low position, start pushing both inline skates outward. But you don’t want to have your skates gliding out in a straight line. Instead, you want your blades to follow an arc-like trajectory.

But at the farthest point on the arc, make sure to start pushing your heel out gently. This ankle motion compels your toes to begin moving inward, toward each other. In the end, the skates converge at the toe, and you stop.

As for your knees, they need to come together as your skates do, but make sure they don’t get too close as to touch each other. Also, don’t allow your skates to move outward too wide, or you’ll lose stability and slam your noggin into the ground.

Whether you’re stopping rollerblades or rollerskates, the plow stop works pretty much the same way. The plow stop is so effective that roller derby participants use it a lot to provide resistance during play.

In my opinion, the plow stop is one of the easiest and most beginner-friendly skate stopping tricks ever invented.

There are several ways to do the powerstop. Since you’re a beginner, it’s best that you start at the very beginning — the basic powerstop.

To learn the basic powerstop, find two small objects such as plastic cones to serve as a focus point. Start by doing wide curves around the first cone. Do the curves one way and then in the other direction.

Be sure to keep your feet aligned properly (somewhat parallel to each other) and as close together as possible. Keep making curves around the first cone until you build up enough confidence doing it in both directions.

As your curves become tighter, you may find you’re losing some of the control you had at first — another reason to gear up properly pre-practice. Also, when you start doing the curves at higher speeds, it’s easy to slide out or even fall. But I’m sure you’ve learned how to fall right at this stage.

The next stage in the progression can be tricky but still manageable. Now, as you near the cone in the next lap, turn the inside foot toward it (the cone) while the outer foot continues along its smooth arc around the cone.

Then, trying doing the figure 8 between the two cones to learn to powerstop on each foot. Keep practicing the powerstop until it becomes the most natural thing in the world.

In this stop, you’re combining two stops namely the drag stop and the powerstop. So, you can’t learn this inline skate stopping technique until you learn the drag stop first.

Well, this rollerblade-stopping technique can be pretty tricky. The method requires quite a bit of practice to learn. But the good news is that it’s doable by any determined beginner who practices it persistently and consistently.

At first, this can feel a little difficult. But it should start feeling easier and easier with enough practice. Well, it’s not so much mastering this slowing-down technique as it is getting a feel for it. As they say, practice makes perfect.

So, get down to work. This is a really effective stopping strategy. The technique is stronger than the sum of the two stopping styles it combines.

The Powerslide is basically a slide you control all the way to a stop. Honestly, though, the Powerslide isn’t the easiest stopping technique there is for beginner rollerbladers. However, just as it is with everything else, constant, determined practice eventually results in sweet success.

This rollerblade stopping mechanism consists of two parts namely transitioning to backward rollerblading and sliding to a nice, clean, safe stop. Let’s now learn how you can handle each part of this skate-stopping formula.

How to Powerslide to a Stop on Inline Skates

This may sound simple and straightforward. But there are lots of beginning skaters who can’t manage this stop because they face tons of inner self-doubt as far as blading backward. I hate to say it, but there’s no mastering this super-powerful stop unless and until you learn how to transition to backward inline skating first.

But how does weight distribution work in this skate-deceleration style? At first, your weight stays evenly distributed over both feet. But as you begin to turn the left shoulder and lift the left leg, the weight gets transferred to the right foot.

Then, as you lift your right foot up, your weight shifts over to the left and eventually distributes equally once you plant the right foot on the ground/surface.

Be Careful, or You’ll Trip

Now that you’ve learned to transition backward smoothly, it’s time to execute the slide that’ll help you come to a stop. As you roll backward, put out the right foot (about 2 feet from the other foot) and turn it about 90 degrees. Be careful here — if your backward stride turns out to be too short, you’ll likely trip and fall.

As you slide, bend your ankle somewhat so that the skate now sits at an angle (about 45 degrees or less) to your direction of motion. And that’s it. You’ve just learned how to Powerslide to a complete stop.

When it comes to weight distribution, your weight transfers to the left foot as you lift and place the right foot behind the left one.

But as your right foot touches the skating surface, you should start re-distributing your weight so that some of it shifts to the powersliding foot. As you stop, both feet end up supporting your weight pretty much equally.

It’s not easy to hockey stop on inline skates, but it’s doable. The trick is to transfer your weight into your heels rather let it be over the entire length of your blades. And rockering your rollerblades in the 76mm/80mm/80mm/76mm configuration does make hockey stopping on rollerblades a bit easier.

Here’s a detailed post on how to hockey stop on inline skates.

How to Stop On Rollerblades: Final Thought

You’ve just learned 6 different ways to stop on a rollerblade. Now it’s time you started practicing the heck out of those blades until stopping becomes second nature to you.

Some techniques such as the T-stop and braking using the heel brake are pretty easy. But learning to execute some inline skating stops can be quite exacting. The drag-to-powerstop and the powerslide stop are examples of stops that require quite a bit of getting used to.

But nothing worth pursuing comes easy. And getting yourself to slow down to a stop when you’ve been pushing hard on your blades is no exception.