It’s nothing complicated. Just moderately easy stuff you can master in less than one hour.

So, let’s learn how to ride a rollerblade as a beginner. I’ll start right at the very beginning — gearing up. I assume you’ve purchased a good pair of beginner rollerblades.

If you haven’t and are here because you’ve been meaning to get into inline skating, read that post and see if you’ll find something decent for your future rollerblading self.

Oh, and there are differences between rollerblading and rollerskating. Be sure you fully understand those differences before you even start thinking about how to ride either skate type.

How to Rollerblade Video (Everything Clearly Explained and Demonstrated) 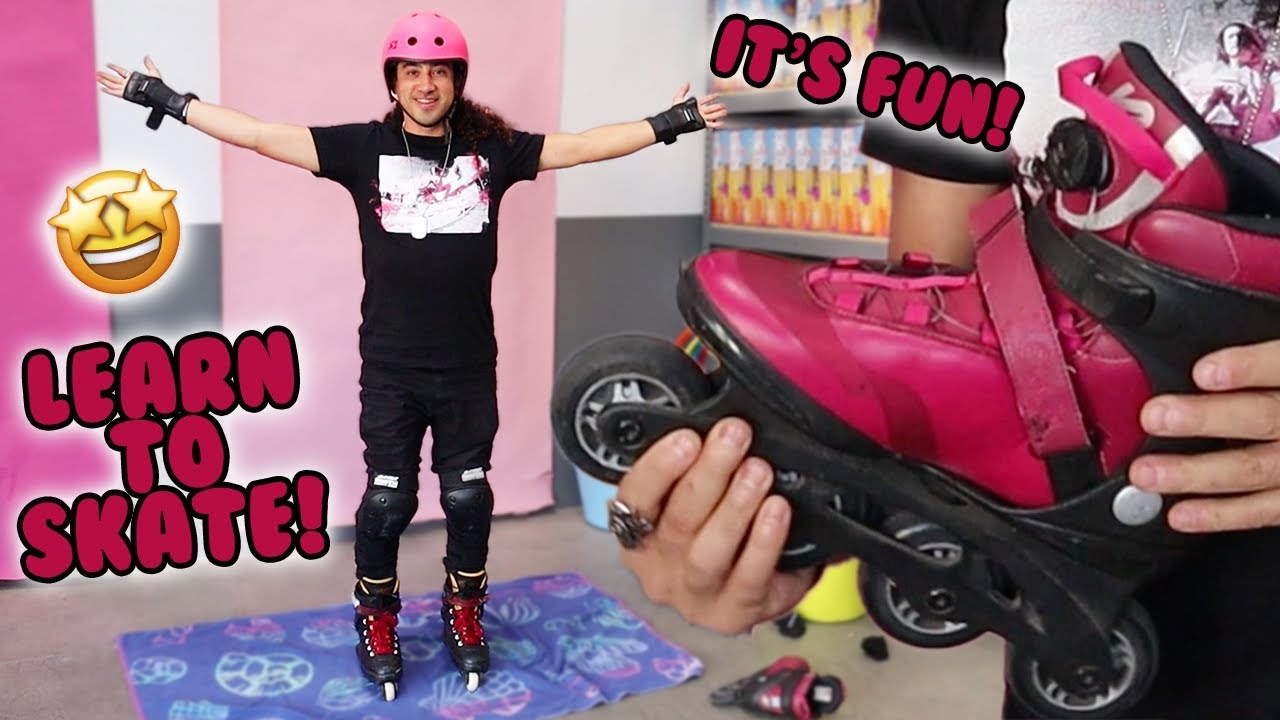 I can’t seem to emphasize this enough, but gearing up is the single most important part of safe rollerblading. Yea, I know, you don’t want to feel funny or stupid or whatever other uncomfortable feeling you keep imagining.

But do you think anyone ever worries about what people think when they’re (the injured skater) nursing nasty fractures at the hospital? Me neither.

Lace Up Your Rollerblades

You likely don’t know how to lace up those new rollerblades because, well, you’re a starting skater. How you lace up your skates depends on what kind of boot you have. Some rollerblade boots use the traditional laces exclusively while others have laces, a powerstrap, and a buckle.

Most beginner rollerblades feature all three closure systems, and I’ll describe how to lace up such a boot.

First, loosen the laces. Next, undo the Velcro powerstrap. Then, loosen up the buckle at the top of the boot. Now, slide your foot inside, and make sure to lock the heel into place — make it nice and snug. To do that, knock the heel of the boot down onto the surface you’re lacing up at while firmly holding both ends of the laces.

Next, tighten the laces uniformly, starting at the bottom going upward. At this point, fasten the Velcro powerstrap. Finally, do the buckle and you’re done.

Video On How to Put On and Lace Up Your Rollerblades 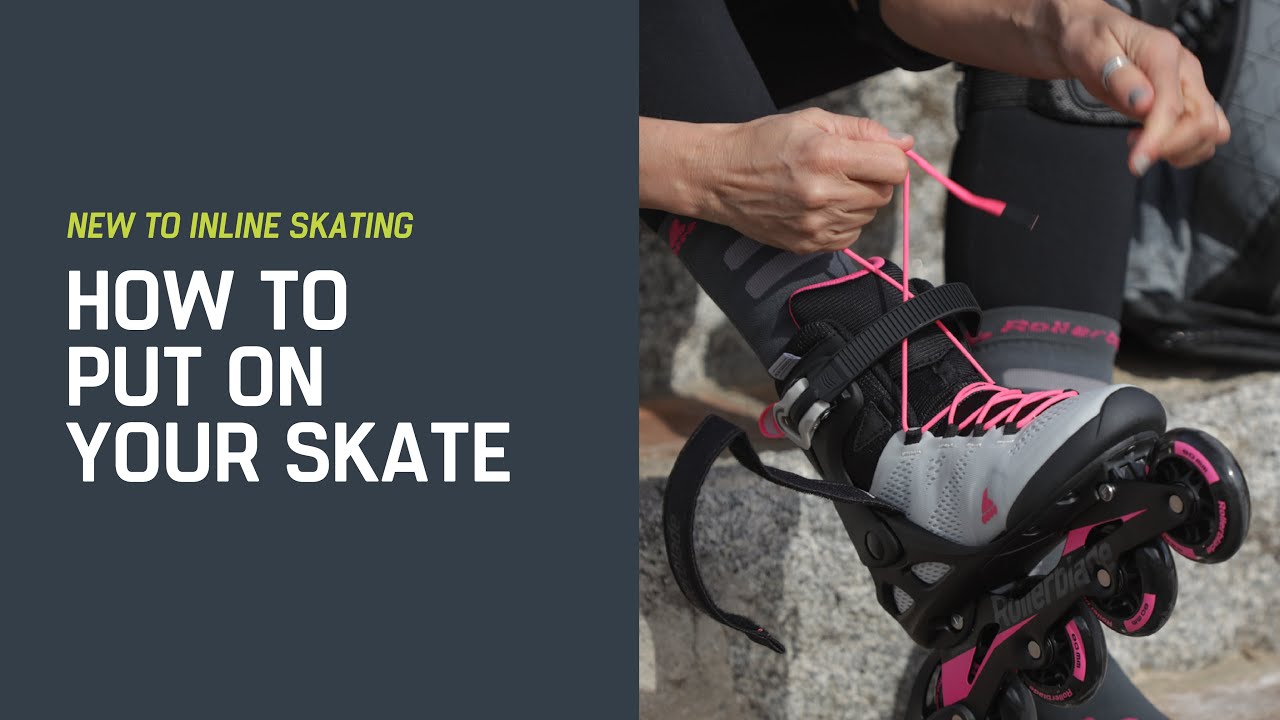 A good helmet for a beginner rollerblader should have at least one critical safety certification. That helmet should be certified to the ASTMF2040 and the U.S. CPSC. safety standards. For pro rollerbladers, a decent helmet typically meets both the CPSC bike and ASTMF1492 skate safety standards. But I suggest that you use an ASTMF1492 rollerblade helmet even if you’re a novice skater.

Your helmet should fit snugly on your noggin, otherwise, the brain bucket will come off of your head in a bad fall or crash. I’ve explained how to size a helmet here, and I’ve also explained how you can determine your head shape in that post.

You should always use a properly fitting helmet. So, put on your helmet now and make sure it stays firmly secured on your chin and head. And if in doubt as to whether your helmet sits right on your melon, read the article mentioned in the previous section. I’ve given a detailed explanation of how a well-fitting brain bucket feels.

You should also wear a pair of good rollerblading knee pads. Elbow pads are also important, just as are wristguards. I suggest you wear hard-shell knee guards such as the Triple Eight knee savers or the 187 Killer Pads. Wearing heavy-duty knee pads such as these ones should be pretty straightforward.

Simply slip the protective pads over your pants as you would a sock and then tie up the top and bottom straps. With some knee pads, though, you might end up wearing them upside down.

For such pads, if someone can read the letters of the product’s name or brand name easily, you got the pads on right. But with most protective guards, it doesn’t matter which side you wear them from. The same goes for elbow pads with a hard plastic shell.

As for wristguards, these can be tricky to put on. Make sure to wear the left piece on the left hand and the right on the right hand. Trial and error works best here.

Wristguards usually have a place where the thumb goes, and there’s a piece of tough plastic that should sit on your palm. You know you’ve worn your wristguards properly when the plastic bit lies squarely and comfortably on your palm. After that, just work the straps (usually Velcro straps), and that’s pretty much it.

Most wristguards typically feature three straps, one long one and two short ones. Hold the longest strap and wrap all the way around your wrist and then deal with the top and lower straps.

Note: your wristguards should be the last piece of protective equipment you wear. That’s because wearing wristguards first would make lacing up, adjusting your helmet’s chinstraps, and putting on knee pads and elbow pads somewhat difficult.

Ready? It’s time to stand up so you can start skating. But standing up with skates on can be tricky. So here is…..

How to Get Up With Rollerblades On

Getting up with rollerblades on can be quite challenging, but you can do it. Now, it’s pretty hard to get up from your bum, but there’s an easier, better way to do it.

So, roll over or turn around and get up on your knees. Preferably do this on the carpet, a towel, or something like that. Doing it on a hard floor might be tricky because the wheels on the blades can’t wait to roll. And these wheels really love hard, smooth surfaces!

At this point, bend over forward a little, and place your hands on the surface. You want to assume the perfect fall position here. By the way, this is the exact same position you get into if you want to fall safely when rollerblading downhill, fast. So, you’re now touching the surface mainly with the protective plastic on your palms.

Now, with your hands still down, try to get up using your dominant foot. This can be a little tricky and it’s easy to fall over, but you have adequate protection so, no worries. At this point, you’re kind of like squatting on one leg. Now, do likewise with the other leg, and the position you’re in now is the frog position or kangaroo squat.

Next, place your hands on your knees. Put the left palm on the left knee and the same goes for the right hand. Now, try to push yourself up using your knees as a supporting base. This isn’t that hard.

How to Stand and Balance on Rollerblades

You’re now standing up, but if you’re not standing right, it’s easy to suddenly start rolling either forward or backward. So, make sure your feet stay parallel to each other.

If you stand with the toes of your skates facing each other, you’ll likely start rolling backward uncontrollably. You might end up hitting your head bad. And if your skates are pointing outward at an angle, chances are you’ll start rolling forward when you’re not ready, yet.

How to Fall Safely When Riding Inline Skates

There’s nothing like rollerblading without falling. You’ll fall, and it makes loads of sense to learn how to fall safely. When you know you can fall and avoid injuries, or at least reduce the odds of getting severe injuries, your confidence in rollerblading soars.

Let’s imagine you’re no longer a beginner and have been having bomber days out rollerblading downhill. But one unlucky day, you’re rolling downward real fast. Suddenly, you realize you must bail, but you don’t want to end up with a costly concussion or broken hips and wrists. What would you do?

The first thing to do is to shoot your hands out forward, like some zombie. With your hands stretched out straight, lean forward a little while bending your knees. At the same time, you’re lowering your body as much as you can. Lower your center of gravity the way you would if you spotted a hundred-dollar bill on the ground.

Next, place your hands on whatever surface you’re skating. Remember to have your fingers facing a little upward. You don’t want your precious fingers coming into contact with the ground, unless you don’t mind getting a broken finger or wrist!

Then, land on your hard-shell-protected knees and slide forward in the direction you were moving in. That’s how to fall smart rollerskating. If you have proper rollerblading knee pads on, you should be fine.

How to Rollerblade Forward

Ready to roll forward? You can stand steady and maintain perfect balance. Now, bend your knees out a little, as you would in a proper beginner ice skating stance, with knees bent a bit.

Now, breathe deep. Then, lift one foot, and then the other. Meanwhile, start opening your feet so that they make the letter V. Your heels are converging and toes diverging. In this position, start marching forward one short stride after another, as though you were a soldier marching.

It’s not hard, but it’s easy to fall over. The good thing is you have ample protection.

Note that rollerblading forward isn’t supposed to work the exact same way as walking. I get it — you need to rollerblade as though you’re walking for the first few days. But with time, make sure to learn how to glide.

Gliding is all about pushing off on your skate using one foot, transferring your body to the other foot, and gliding until that stride ends. Then, push off with the other foot and simultaneously shift your weight to the other foot, rinsing and repeating until you turn your forward glide/stride into an art form.

How to Roll Backwards on Inline Skates

I can’t say I’ve mastered going backward, but I’ve been practicing for quite a while. Initially, the very thought of rolling backward was kind of terrifying, but I eventually overcame the fear and did it. Just like you will if you persist.

There are several ways of gliding backward. I’ve even seen skaters who invented their own way of going backward. So, there are no hard and fast rules when it comes to going back. I watched the how to rollerblade backward video above and learned how to do it. Not so well, but at least I can do it even though I still feel pretty much like a beginner doing fakie.

To roll backward, first, get into a good stance. So, take a staggered stance as you start gliding forward. Then, lift your heels just a little and then turn. And as you pop and turn, maintain the staggered stance and overall stability. Now, you have one foot behind, and the shoulder on that side pushed back over that leg.

Meanwhile, the other leg stays in front. Use the front leg to make S shapes while the other foot stays fixed and doesn’t try to do anything. The foot drawing the S shape works pretty much the same way a fish’s fins do.

Once you master to pop, turn, and glide backward, make sure to practice doing it with the other shoulder pushed back and the feet changing roles.

Putting it All Together

Rollerblading isn’t all that hard. Pretty much anyone can do it with a little training and enough dedication. But before you start learning how to rollerblade, gear up first.

Then, have an instructor guide you. Or watch a few Youtube videos on how to rollerblade for beginners. By the way, did you watch the video I embedded for you above?

Getting up and standing right on inline skates can be a little tricky at first. But once you master that, you’ll be blading forward effortlessly in no time.

Going backward is definitely harder than rolling forward. But with persistence, you can (and hopefully will) learn how to do it nice and smooth in a couple of hours.