So you’re a pretty decent ice skater who loves shaving ice when the winter season rolls around. And you have learned the T-stop/parallel stop and can use it as easily as you do breathing. You recently started rollerblading and are now wondering whether your stopping skills on the ice fully translate to inline skating. You’re asking: Can you hockey stop on inline skates?

Can You Do the Hockey Stop On Rollerblades?

Yes, it’s technically possible to hockey-stop on inline skates. However, executing the hockey stop on rollerblades often proves to be a much harder task than in the case of parallel-stopping on ice. Still, many rollerbladers find T-stopping on inline skates very even when they’ve mastered the same skill on ice skates. In ice skating, this amazing stopping technique brings you to an abrupt without fail pretty much every time. But it’s quite easy to lose your balance in inline skating and fall when you try the T-stop at speed. That said, some inline skaters are quite comfortable using this stopping strategy on their skates and can do it reliable — and most importantly— safely.

How to Hockey Stop on Rollerblades Video 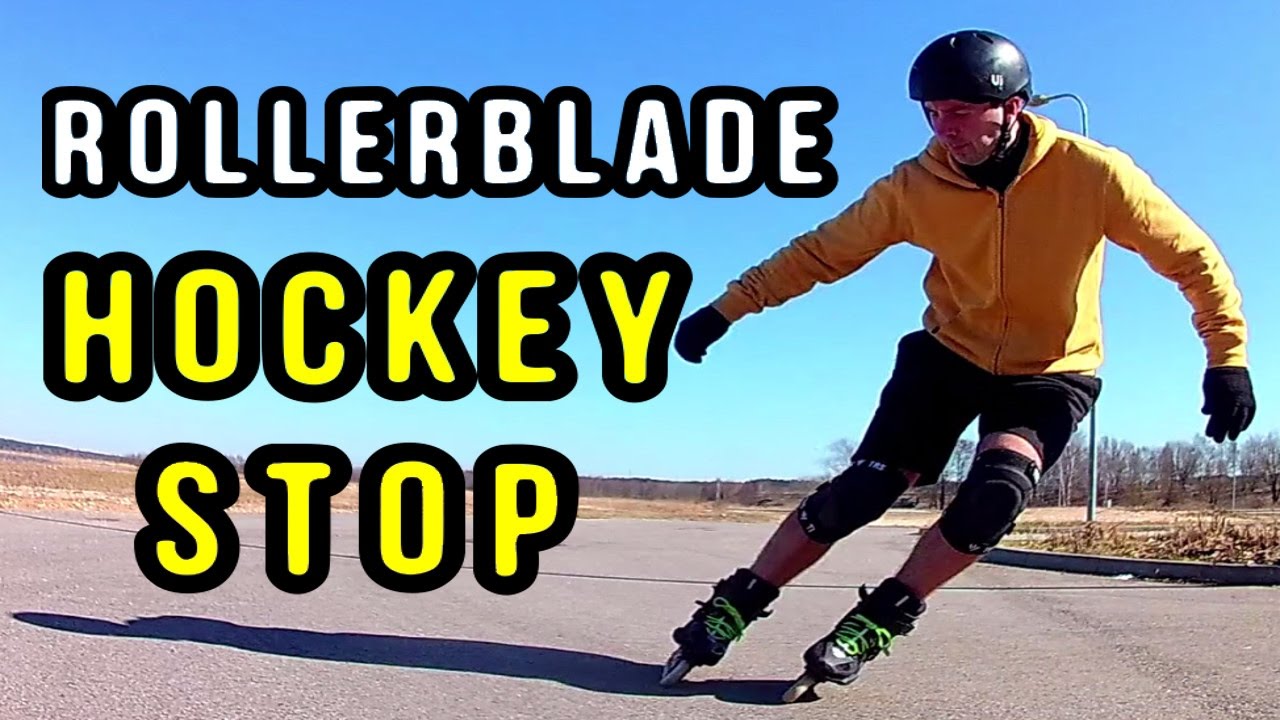 Is Hockey Stopping on Rollerblades Easier on Wet Surfaces?

No, it’s not. It took me quite a while to learn how to hockey stop on inline skates. At some point, I thought practicing this stopping trick on a wet surface would be somewhat easier. I mean, doesn’t wet asphalt or concrete have the same slidey qualities as an icy surface?

I was wrong! I ended up on the wet asphalt, and my knees hurt quite a bit. Not to say I felt even more frustrated at that point in time. I still struggle quite a bit with this stop. And what it makes it even harder is a thought at the back of my mind that I don’t really need this stopping method on rollers anyways.

You Probably Don’t Need to Learn Hockey Stopping on Rollerblades

If you’re like me and like trying new things even when they don’t mean a thing, it is fine. But if you’re an inline hockey player, you probably know that the ice hockey stop isn’t only very hard but also pretty much pointless.

Look, there are quite a few better and safer ways to stop on rollerblades than the hockey stop. And you shouldn’t beat yourself for not being able to use a relatively ineffectual stopping technique. If you’re a beginner in inline skating, here’s how to stop on inline skates for new skaters.

One thing I’ve learned is that the hockey stop tends to be easier if I’m not skating at a high speed. But who wants to spend every minute of their free time trying to master a technique that only works some of the time?

Small wonder many inline hockey players don’t bother learning the hockey stop. I mean, these players are almost always speeding around the rink, and this method isn’t super useful for them.

But if you’re a recreational inline skater who just wants to learn another fun and cool way to stop, why not?

How to Hockey Stop on Inline Skates

Before we proceed, let me admit that I’ve not yet mastered this stopping technique. I still wobble a little some of the time, and other times the front wheel of one skate grips the skating surface, causing me to rotate haphazardly, lose balance, and fall over. Good thing is that I’ve not hurt myself badly so far.

Plus, I skate with good knee pads for roller skating. Also, I always helmet up before hitting the road, rink, park, or wherever. I like having my brain around, you know.

To hockey stop on asphalt, concrete, or other hard surfaces on inline skates, you need to modify the ice hockey stopping technique. In fact, how you stop on a dry surface is quite different than how you do it on the ice.

You need a different approach, different to the extent that you’re pretty much using a different stopping strategy altogether. Actually, most ice skaters who learn how to stop on inlines using the ice hockey stop feel that their stopping ability on the ice suffers to some extent.

By the way, does rollerblading help an ice skater’s ability?

So, find a good surface and start learning. The best place for learning the hockey stop on rollerblades is a relatively smooth surface.

A flat, reasonably smooth concrete surface would be ideal. Well, the surface doesn’t need to be extremely smooth, but in general, a smoother surface gets you better results.

Because a large part of the hockey stop is sliding on the skating surface, and it’s easier to slide if the surface is smooth enough.

Step 2: Master the 4 Key Parts of a Hockey Stop

This is the second and final step — mastering the basic moves required to do a hockey stop on rollerblades. These four parts of a hockey stop include the following:

Inside and Outside Edges

You need to set up your edges the same way you would if you were about to do some cornering. I bet you already know how to turn on rollerblades. If you can’t tell an outside edge from an inside edge, stop reading and learn how to rollerblade.

In the compression phase, you’re doing two important things. You’re bending your knees, and you’re also flexing your ankles. To do these two things or make them easier, you need to push your shins forward into the front of your inline skates. Doing that naturally forces your knees to bend a little. And as you rise up or decompress, weight transfer into your heels happens.

At this stage, what you want to do is transfer some of your weight over into your heels. This is where it gets problematic for most ice skaters.

If you ice skate, you already know that the skater’s weight is distributed over the entire blade as opposed to a specific point.

But when doing this stopping trick on rollerblades, you need to shift your weight to a point somewhere over the third wheel of your skate. If you transfer your weight too far back, I guarantee you’ll end up on your backside.

The reason I’m calling it counter-rotation is that you’re going to rotate opposite to the direction of your turn. Instead of putting your hands out front as you turn, you need to quickly rotate your arms in the other direction. As you move your arms, the counter-reaction to that motion enables you to change direction and stop.

Now, while these four steps are distinct and separate, they’re performed together in a flowy pattern. It’s hard to tell where one step ends and where the next one starts. Besides, these moves happen pretty fast.

Even the keenest observer wouldn’t be able to tell which step you’re executing at what point. All they see is you launching into a smooth turn that helps you stop on your inline skates.

Now, start practicing these four moves in slow motion on a flat, smooth surface. Imagine yourself smoothly and easily going through these steps, and keep practicing until you perfect this stopping technique.

But, don’t expect to become a master of the rollerblade hockey stop the very first time you try. It’ll take a bit of time. And if you’re like me, you’ll still struggle with it even after you’ve been practicing a couple weeks.

Rockering a rollerblade basically makes it an ice skate. It’s like shortening the wheelbase, and as we all know, using a shorter frame boosts maneuverability.

Many inline skaters say that practicing the hockey stop felt easier and smoother on a pair of rockered rollerblades. However, they said it was somewhat harder to balance on modified inline skates.

Final Thoughts on How to Hockey Stop on Inline Skates

Admittedly, doing the hockey stop on rollerblades can be a bit challenging even for skaters who’ve mastered the same stopping technique on ice skates. While the stop may seem similar, the fundamental mechanics needed to stop are different.

In fact, skaters who learn how to use this stop on inline skates find that they need to make certain adjustments once they get back on icy surfaces.

But it’s possible to learn and master this stop — it’s just it’s not easy, and it’s not a super effective or safe stopping strategy on rolling wheels.